I’m going to show you about the project i made for myself which I made not as professional as if I made it for sale.

I want to write about this as I’ve been a bit ‘tickled’ since I saw a doll clothes product which is finished in unprofessional way (this is my opinion. I have my own standard about it). It’s ok for me to see the seam edge cut with zig zag scissor to prevent from fraying or may be just leave it as long as the cutting is alright and seal with special glue. Yet, in my opinion, i don’t know what this person means by sewing zigzag on the edge. The zigzag is also wide  and not really protecting the edge. So, it was there but with no function at all. I don’t know. And it makes the sewing looks a mess. Perhaps for other kind of projects, it’s ok, but as for dolly project, I don’t know. That handmade is sold. The buyer told me she bought a lot from the seller and the total amount is pretty huge for me. I wonder, if the seller has this kind of ‘professionalism’ inside. Even the buyer said,”even I (actually) can sew it neater.” The buyer just wanted to help the seller so then bought lots from the seller.

The clothes, any clothes, any projects I made for sale is pretty different from ones for myself. Ones for myself as a level of professionalism degree lower than I’m going to sell. I’m pretty cautious when it comes to product quality. I’m not saying my sewing is flawless but I wont just sew recklessly and without thinking. I won’t sell anything like that the buyer show me (not only one buyer). It’s scary to receive money for something I don’t do from the heart and mind. There’s responsibility regarding to the money.

The clothes below is my project. It’s done unprofessionally for myself. 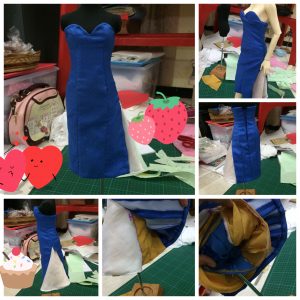 That dress… I won’t do those things above  if it was for selling. NO WAY.

For other clothes without lining, even if for myself, I serge it almost all clothes I made. May be only a few i didn’t serge bcs of the nature of the fabric which can’t be handled by my serger machine and because of the nature caused by the size. For example, serging small clothes can create thickness which can make the whole result looks not at maximum.

NB: I didn’t mean to judge other people’s work. It’s up to them how they want to do it but when it comes to ‘selling’, the word ‘professionalism’ follows. Sometimes I saw that some people are able to sell a lot even without that word follows. The worse is sometimes they beat up the ones who try to sell in professional way by badmouthing so they can be more exist or above the those people.

Anyway, it’s up to the buyer also which product they want. Their money their right

It’s just my opinion. Even if i’m still fighting to market my product, even to produce it (as i’m so busy as a mother of twins), that ‘professionalism’ thing is in my head and heart. I’m not perfect but I can still make it differ between ‘doing the best’ and ‘doing as fast as possible, wth with the result’. I saw my non-seamstress friend’s work. Awesome. Very neat. I could feel her effort came from heart and mind. Doing the best is definitely a tag to her work.